The sublime chip past Hart

The AS Roma official website neatly encapsulates the importance of Francesco Totti to the Giallorossi. It states “It might read Totti but it’s pronounced Roma: Francesco is not only the captain of AS Roma, but the symbol of the Club. Roman from San Giovanni, and “practicing” supporter of the Giallorossi since a very young age, when he used to travel by scooter with friends to see Roma in the Curva Sud, the number ten is without question the best player in the club’s history.”

Totti celebrated his 38th birthday at the Stadio Olympico last weekend by starting – as usual – for manager Rudi Garcia’s team against Hellas Verona. Although he failed to score, the Ultras he would doubtless have been standing alongside had he not been wearing the famous red and yellow colours, were still satisfied with a 2-0 victory for Roma. The win maintained their perfect start to the season with a run of five straight victories and placed them alongside Juventus at the head of Serie A.

Totti made his debut for Roma at as a 16 year-old, and in the intervening 22 years has played over 700 games. The very epitome of a one-club player, he also has 235 league goals to his name.  The total leaves him 39 behind all-time Serie A record-holder Silvio Piola, but Totti remains dedicated to surpassing that number; not least as Piola played for Roma’s city rivals, Lazio. As a 12 year old, Totti had rejected an opportunity to sign for ‘I Biancocelesti’ as the only colours he ever had eyes for were Giallorossi.

Anyone who doubts such dedication and drive could be pointed towards the television coverage of Roma’s opening game in the Champions’ League this season. The Italians were facing CSKA in their first contest in the competition for over three years. As the anthem played and the camera panned down the line of players, Totti – clearly relishing the opportunity that he feared may never come again – was overcome, with tears in his eyes. 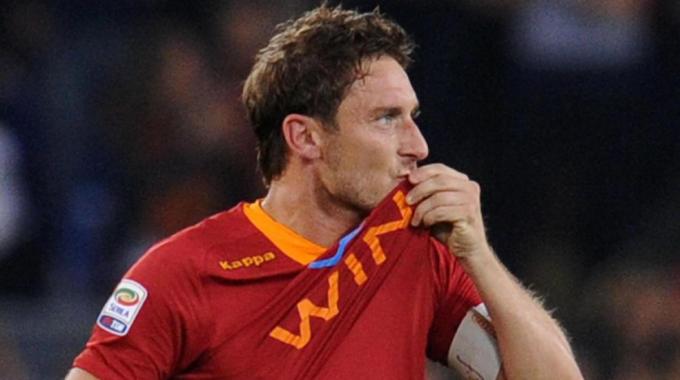 Totti only ever wanted to play for Roma.

When he achieved his dream, and made his debut for Roma back in 1993, few would have foreseen the career that lay ahead. Although with only a single Serie A title and two victories in the Coppa Italia to his name, across the decades he also finished as runner-up in the league a further seven times, and losing finalists in the domestic cup five times. Today, he regularly plays alongside players who were not even born when he first turned out for his boyhood heroes, although a few short years ago, his career appeared to be in terminal decline.

An apparent loss of form, lack of fitness and seemingly a spent desire looked likely to bring down the curtain for Totti. A section of the press even turned against him, declaring that he was having an adverse effect on the team, calling for the unthinkable, and pushing for him to be dropped and moved on. In typically resilient fashion however, Totti hit back in the best way possible. Applying himself to a strict dietary regime and fitness programme, he shed 13 pounds over the summer break and his form kicked on again.

Never blessed with an abundance of speed, the aging effect has had little effect on slowing a pace that was only gentle at best. With a Sheringham-like football brain however, he has that innate ability of the first five yards of a run being in his head, meaning he still often leaves defenders in his wake – as was witnessed by City defenders.

With Roma striking the head of Serie A again this season, and the thought of playing without their elegant ‘number ten’ almost bordering on heresy, there’s little prospect of Totti singing “Arrivederci Roma” any time soon. Nothing is forever of course, but in the eternal city, this one could run for a while yet.