Last weekend, led by their new manager Marcelo Bielsa, Marseille defeated St Ettienne in Le Classique to go two points clear of Bordeaux  at the head of Ligue 1 and a full five points in front of oil-rich PSG.  After two games without a win, OM have now recorded six straight victories and look a solid contender for Le Championnat.

When Pep Guardiola was considering taking up coaching, he sought out the advice of the man he described as ‘the best manager in the world.’ A man often nicknamed ‘El Loco.’ Undertaking an 11 hour journey to South America seemed very much worthwhile however, as the two men sat and talked long into the night. The apprentice was told of the effects of the job and folklore has it that he was asked “Do you really like blood that much?” It may have seemed an extreme way of warning the younger man of what lay ahead. A few years later, after three league titles, two Champions Leagues and two World Club Cups, when a drained Guardiola exited Barcelona, he understood. The wisdom was borne out. It’s somewhat ironic then that Guardiola’s last match in charge of the Blaugrana was against Athletic Bilbao, managed by El Loco himself, Marcello Bielsa.

Bielsa was born in 1955 in Rosario, Argentina, and as a fairly mediocre defender he made only 65 first team appearances before retiring at 25 to concentrate on coaching. His new career was as spectacularly successful as his old one had been insignificant. Taking up his first post with boyhood club Newell’s Old Boys in Argentina, he won the Primera Division title in 1991 and the Clausura the following year. In the same year Newell’s were runners-up in the Copa Libertadores. He then moved on to two other Argentinian clubs, Atlas and America, before joining Velez Starsfield in 1997 and taking them to the Clausura the following year. After decamping to Europe, he took control of Spanish club Espanyol. It was a brief stay however, before he was whisked back to Argentina to coach the national team, where he served for six years before a further four year spell in charge of Chile.  Then in 1992 he took his second La Liga job when he joined Athletic Bilbao. 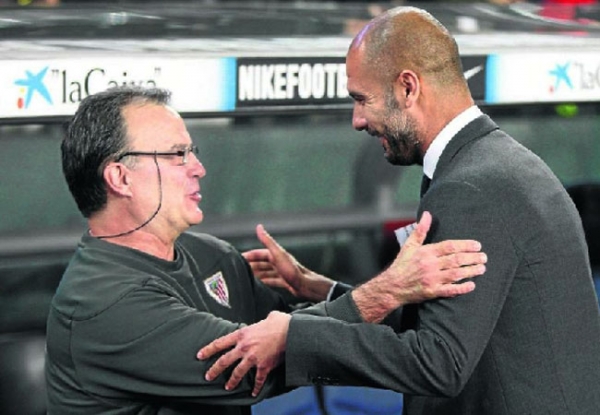 There’s a deep mutual respect between Bielsa and Guardiola

Guardiola’s admiration of Bielsa was not only due to his ability to describe the effects of a top line manager’s job on his soul and well-being, it was also a reflection of the young Catalan’s own views of how the game should be played, and how this meshed very much with the views of the Argentine. At Bilbao, this philosophy of attacking swiftly and in numbers, coupled with a high pressing game to win back possession of the ball in the opponent’s half was successful in propelling the Basque club to the forefront of the game in Spain.

Bielsa is nothing if not individual and driven however, and it is this intensity that both earns him his sobriquet and drains him. During his time with the San Mames club, he had apparently developed a habit of walking up and down the touchline precisely 13 steps, before turning for another 13, whenever his team repelled an attack. When one of his players, Iker Muniain was asked whether he was really as mad as he seemed, the player said “No. He is madder.”  Another player Fernando Llorente described how he “lived for football,” while a third, Javi Martinez, told of him often not leaving the training ground until the early hours of the morning. Bielsa is also obsessive about analysis and has built up a huge library of recorded games from across the globe that he reviews again and again using colour-coded spreadsheets. His approach at Bilbao was however undoubtedly successful.

Fans of Manchester United may particularly remember a Europa League tie with Bielsa’s team back in 2012. The Basque’s put Sir Alex Ferguson’s team to the sword in both of the home and away legs, destroying the vaunted Reds with pacey attacking play and going through 5-3 on aggregate.  They progressed through to the final, only then losing out to Atletico Madrid, and then also lost the Copa del Rey to Barcelona, in the match described above.

Two years after joining the Basques however, he was gone. Bielsa rquires others to replicate the application he gives, and those that follow him are often quickly worn down by it. Those that don’t, drive him away. Guardiola has remarked that he expects Bielsa’s teams to “run, run, run, run.” This demand for physical commitment coupled with a reluctance to rotate his squad, often sees his teams’ aspirations evaporate as the season progresses.  His demands are not only physical however. He wanted greater financial commitment from the Basque club’s hierarchy, but players were sold and Llorente was frozen out over a contract dispute. The momentum fell away, and the following season they finished a lowly twelfth in La Liga. No new contract was offered to the manager. It’s questionable if he would have signed it had it been so.

After much rumour, Bielsa landed at Marsaille in May. In true Bielsa style, the first couple of league games were disappointing with a draw and a defeat. It was a similar story in the Basque Country. Then, as with Bilbao, the message seemed to click, with the players appreciating their coach’s approach and requirements. Suddenly, momentum was in place, and the half dozen victories followed.

The question arises as to whether Bielsa has managed to temper his off-field obsessions without damaging the effect it has on the pitch. Although he now seems to have eschewed his 13 pace walks, for a more sedate seat on top of the cooling box holding the players’ drink bottles, other indications seem less positive. An early season disagreement with the club directors regarding summer transfers set a simmering precedent.   “None of the players joined with my approval,” he declared. “I proposed 12 and none of them came.” Adding that, “the way the club is run disappoints me.” Marsaille fans may need to enjoy the success Bielsa is bringing. It may not last very long.

The intensity of Bielsa defines him.

Lots of managers bring ‘baggage’ with them that almost ensures that any stay will only be temporary. Jose Mourinho springs to mind, despite protestations that his current tenure at Stamford Bridge may be ten years’ long. We’ll see.  Perhaps Bielsa is such a man. For a manager who hasn’t secured a domestic trophy since 1998, however, the case for him may be less compelling. Let the man himself have the last say however. “A man with new ideas is mad until he succeeds.” OM fans will be hoping this particular revolution doesn’t end with the ‘chop.’

(This All blue Daze article was originally produced for ‘theaspirer.co.uk’ website).