Fifteen minutes that could lead to long-lasting fame for Ian Cathro.

It’s one of those quotes with a doubtful origin that has now become part of the lexicon of everyday conversation.  “In the future, everyone will be world-famous for fifteen minutes” is widely attributed Andy Warhol. Whether the aphorism was down to the icon of pop art or not however, a fifteen minute period in the career of Scottish football coach Ian Cathro may have been the trigger to his particular rise to fame.

Going back a few years, Cathro was an unheralded junior football coach, working with school children in Dundee when he was spotted by Craig Levein. The then Dundee United boss was impressed with what he saw and took Cathro to Tannadice to lead the club’s academy. He was 22 at the time, and one of his charges was the then even younger Ryan Gould; the tyro midfielder nicknamed ‘Mini Messi’ who recently shipped out to Sporting Lisbon to continue his footballing education. Progress went well, and Cathro was fast-tracked into the SFA system appointed to take charge of the Dundee regional performance school.

For many it would have been a meteoric rise, and a cause for quiet satisfaction. Ian Cathro was however nothing if not ambitious, and fairly quickly he appreciated that his ambitions for a top job in his home country may be stymied by a Scottish tradition of only appointing former players, and the old boy network still prevalent north of the border. As a former player of mediocre talent that quickly realised that any dreams of glory on the field were destined not to be his, “I was never a good player, it wasn’t a major sob story,” there seemed an ominous block in his path to progression.

The SFA performance director doubted Cathro’s commitment to the cause. It’s not something the coach seeks to dispute.  In a recent interview, he remarked that, “It was not a reflection on the SFA coaching sessions. From my side of things it was entirely about me turning the page. The feeling was so strong inside of me. I felt that if I made the commitment then it would need to be a ten-year commitment because of what we were doing. It’s all or nothing and I knew I had to start the new chapter now or wait ten years and ten years seemed a long time.” The only path that Cathro could see to progress his career was to leave his native Scotland for somewhere he could develop his talents. Sadly, such opportunities tend to be few and far between. A chance meeting at a SFA coaching course would open a door however.

Nuno Espírito Santo, a retired Portuguese goalkeeper who had previously worked under Jose Mourinho during the Chelsea manager’s time in Portugal was attending the coaching course. Cathro was among a number of coaches who had put on 15 minute sessions at the course, and at its conclusion, Santo walked over to Cathro. He picks up the story, “We all put on a 15-minute session and, afterwards, he came up to me and started talking. He gave me one massive piece of praise and one massive piece of constructive criticism and that made him interesting to me. He was humble, open and direct with me to the point where I immediately realised that he was someone who could help me grow, both as a coach and a man.” It was not only advice that was offered however, Santo also offered a chance to join him at Rio Ave in Portugal’s Primera Liga. It was an open door that Cathro decided to walk through. 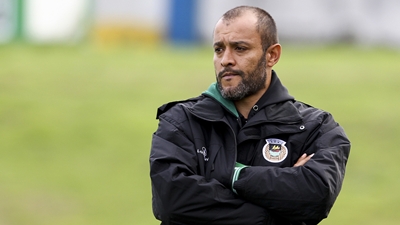 The two seasons with the provincial northern Portuguese club was a startling success, with a top six finish in the league, two cup finals and a debut for the club into European football. It was a story that reached a way across the Iberian peninsula and when Valencia, newly-funded by an ambitious owner looked for a young and upwardly mobile manager, Santo was approached. The chance to move into La Liga was not one to be scorned, and Santo wasted little time in taking Cathro with him. Last weekend, the nascent Spanish season saw champions Atletico Madrid visit the Mestalla. A tour de force performance from  ‘Els Taronges’ saw them race to an early 3-0 lead, before Diego Simeone’s pulled a consolation goal back that did little to dent the impression that Valencia, under Santo and Cathro were very much on the way back.

Valencia players celebrate as they beat the La Liga champions.

The ambitious Scot however is far from convinced that his long term future lies in Spain. His success in Portugal and the opportunity in La Liga is still very much part of an ongoing process. He has no ambition to stay as an assistant and longs for the opportunity to prove himself as a manager, describing himself as a “work in progress.”

“I consider this season as a bit like a finishing school or the final year at university,” he said in a recent interview. “I’m looking to get about three years of experience out of it to accelerate my own preparation. I want to manage and I want to do it as quickly as possible. I’ve got a very clear gauge in my mind of when I’ll know that I’m ready and I’m not there yet. But depending on the circumstances of [my next] club, I’m not that far away.” There were rumours of approaches from both Scotland and England last summer, and should Valencia’s progress continue this season, there will doubtless be more next year.

There’s no particular star-struck caprice about Cathro though. Stepping down to a lower league should he return to the UK is seen as the likely outcome.  Questioned if he would be prepared to leave the glamour and glitz of La Liga and possible Champions League football for a lesser light, the Scot replied with typical candour. “Yes, no doubt.”

Any ambitious Championship club looking for an ambitious manger during next summer could do a lot worse than consider Ian Cathro. With his record of success, and long coaching experience, coupled with a successful ‘finishing school’ in Portugal and Spain, there’s every likelihood that should success follow, both the club and Ian Cathro would be famous for a lot longer than Warhol’s fifteen minutes.