If you’re the sort of player who travels the world kicking around various leagues having a decent, but hardly world-shattering career, with a hairstyle that marks you out as ‘individual’ to say the least, having another claim to fame can be invaluable. For all gamers who adopted the persona of a manager in a simulated world around the turn of the century, signing Taribo West for your club was a pretty astute move. Bargain basement signings that kick on to become stars in that electronic environment are the very essence of carving out a successful managerial career, and Taribo West slotted right into that category. When games were played on grass rather than keyboards though, things were a bit different. END_OF_DOCUMENT_TOKEN_TO_BE_REPLACED 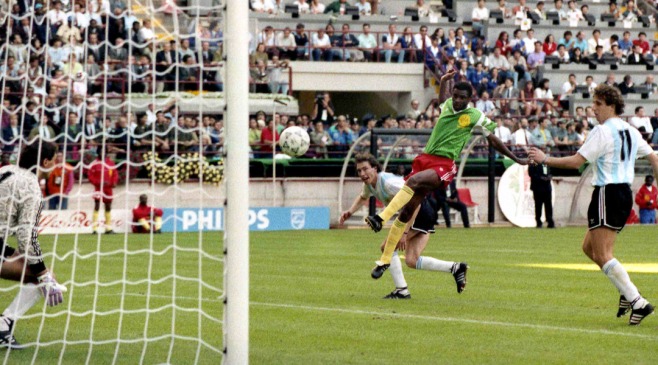 It was the opening game of the 1990 World Cup, with holders Argentina, including the mercurial Diego Maradona who had just almost single-handedly taken his Napoli team to the Scudetto, pitched against an African team representing Cameroon populated by players that hardly anyone had heard of drawn largely from the ranks of the lower tiers of French club football and similar less celebrated leagues. It was a chance for a rousing South American performance to set the wheels of the tournament spinning as they hit the ground. What happened however was of far greater significance. END_OF_DOCUMENT_TOKEN_TO_BE_REPLACED

FC Nania, Abedi ‘Pele’ Ayew and a hatful of goals.

The last day of any season can be a bit of a nail-biter, especially when there’s everything still to play for. Back at the end of the 2002-03 Scottish Premier League season, with a single game to play, Celtic and Rangers were tied on 94 points. The clubs also had a tied goal difference of plus 68. It became a last day shoot-out as to who could win their last game by the largest margin and take the title. Celtic travelled to Kilmarnock and won 4-0. At the same time however, Rangers entertained Dunfermline and secured a 6-1 victory. It was a result that also brought the title back to Ibrox by the slimmest of margins. In the end, it had come down to an injury-time penalty, coolly slotted home by Mikel Arteta to give Rangers the round half-dozen, and stymy Celtic’s effort by a single goal.

Although the two Glasgow giants rattled in a total of ten goals between them, whilst conceding a single strike, there was precious little talk of any underhand skulduggery or anything less than scrupulously contested games. After all, despite the two defeated cubs finishing the league in fourth and fifth positions respectively, Kilmarnock trailed the top two by no less forty points, and the gap to Dunfermline was over fifty points. The results therefore were not that much out of kilter, especially with the Glasgow clubs having so much to play for, and the other two teams comparatively little. A few years later, another last day battle took place between two clubs tied on points and battling for big wins to sway goal difference advantage and gain promotion to the top echelon of their domestic league structure. If the ‘Old Firm’ battle offered no hint of controversy though, this one differed on that particular count. END_OF_DOCUMENT_TOKEN_TO_BE_REPLACED