The greatest goalscorer in the history of football. 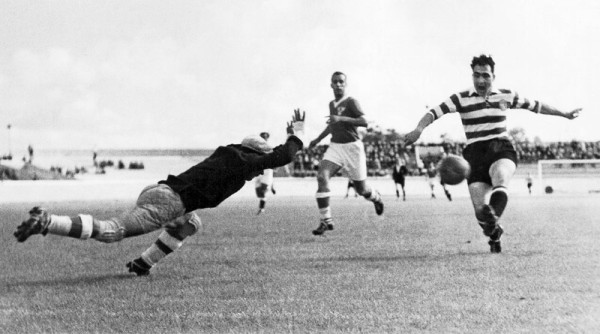 In the pantheon of the greatest Portuguese goal scorers to have graced football over the years, one man stands head and shoulders above all others. Whilst some would say this must surely be Cristiano Ronaldo, others, with longer memories, may advocate the case for accolade going to Eusebio, Mário Coluna, José Augusto Torres or reaching further back, perhaps to José Águas. But, no. None of these celebrated luminaries have records that can come remotely close to the man who is not only the greatest scorer in the history of Portuguese football, but also has a reputable claim to be most prolific striker in world football across national championships in the history of the game, with 309 goals scored in 189 games.

Take a look at that stat again. No, that’s not the wrong way around. That’s right. No less than 309 goals in less than 200 games. This averages out at a scarcely believable, but entirely verifiable, rate of 1.63 goals per game. In comparison, Eusebio’s strike rate is marginally above a goal per game, whilst Ronaldo averages a comparatively insipid 0.75 per game. Portugal’s – and indeed, statistically, the world’s – greatest goal scorer of all time is, surely unarguably, Fernando Peyroteo. END_OF_DOCUMENT_TOKEN_TO_BE_REPLACED