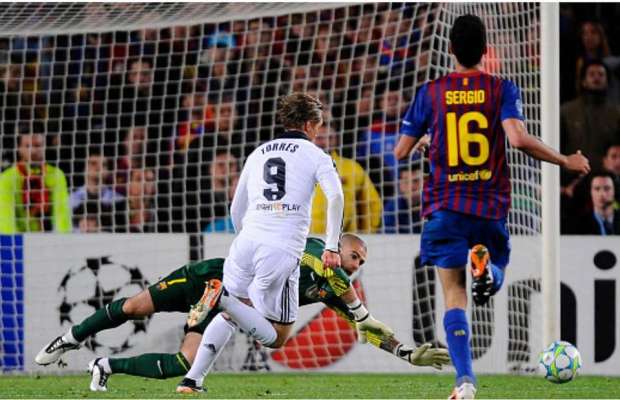 There are many reasons why certain goals are memorable. They can come in big matches, be part of an ongoing rivalry between the goalscorer and the team he nets against. Perhaps it’s the type of goal where the player runs the length of the pitch before rounding then goalkeeper and scoring, something especially difficult in an away game against a massive club in one of the biggest tournaments. Or, perhaps it’s the sort of goal that rewards a team for outstanding fortitude against the odds, when all seemed lost. Some goals have a few of these elements, but very few have them all, and this is the tale of one that does just that; a goal that Gary Neville described as “Un-bel-eive-able!”

On 24 April 2012, Chelsea turned up at the Camp Nou to defend the slenderest of leads, thanks to a backs-to-the-wall effort at Stamford Bridge where, in a game overwhelmingly dominated by the visitors, Didier Drogba had managed to snaffle a precious goal on one the home team’s rare visits to the opposition penalty area. Now they had it all to do keep their Champions League aspirations alive in a game where Barcelona were sure to be looking to secure the goals their domination should have earned a couple of weeks previously in west London.

Things didn’t start well for the visitors. A dozen minutes in, Gary Cahill tweaked a hamstring and had to be replaced. It would get worse. Despite holding out until ten minutes before the break, a rare goal by Sergio Busquets brought the aggregate scores level. Two minutes later, a malevolent rush of blood to the head saw John Terry dismissed after a senseless knee into the back of Alexis Sanchez. It didn’t end there. Just two minutes ahead of the break, Andrés Iniesta netted the second for Barcelona to put them ahead, and leaving Chelsea “…a mountain to climb,” in the words of Martin Tyler. The game looked well and truly up for Roberto di Matteo’s team.

A goal by Ramires in injury time at the end of the half seemed scant consolation. Yes, it put Chelsea ahead on away goals, but surely wouldn’t be enough. The second period would inevitably bring a Blaugrana onslaught and down to ten men, with both first-choice centre-backs off the field it looked like it would need something extraordinary if Chelsea were to survive; something quite “unbelievable” in fact.

Sitting on the Chelsea bench as the white line held firm against the home team’s swarming attacks was Fernando Torres. Born in Fuenlabrada in the Madrid Metropolitan Area, El Niño had log been a hate figure for the Cules in the Camp Nou. As well as hailing from the heart of Castilian Spain, in his first period with Atletico Madrid, he had scored seven goals in a mere ten games against Barcelona, and last year took that total to 11 in 17 games. The goal he would notch in this particular game however may well have been the most galling for the Cules.

As the expected onslaught raged on the pitch, Torres watched from the sidelines. For over half-an-hour the attacks battered at the white wall Di Matteo had organised to prevent his team capitulating under the pressure. Chance after chance was squandered, but still a Barça goal didn’t come; Messi even crashed a penalty against the bar and away, as the home team charged forward. With just one substitute change remaining, Chelsea’s Italian manager threw the fresh legs of Torres into the fray with ten minutes to play, detailing him to defend the left flank of the stubborn defence.

Another home attack broke down, and the ball fell to Torres. Trying to drive downfield to ease the pressure, he hit the ball forward and then chased. Possession was lost though, and Torres slowed to an amble, then a trot forsaking his defensive position. The ball was driven into the Chelsea box for the umpteenth time, but another block diverted the ball up onto Ashley Cole’s chest. The full-back lashed the ball clear, with surely ne’er a thought to it being a potential through ball. It was simply a hack away from danger.

As the TV screen followed the ball however, Fernando Torres also honed into view. His aborted breakout had taken him past the last defender, and as the ball dropped to his feet around the halfway line, he was clear. Only                 Carles Puyol was even in the same screen, but he was some 15 metres behind the galloping striker. Back in Spain, and at a ground where he had scored a number of times previously, Torres shed the cement overcoat that had hampered so much of his play for Chelsea, skated clear, rounded Valdes and rolled the ball into the net. “Ooooh,” orgasmed Gary Neville as Torres turned away, sinking to his knees in front of the home fans who were probably shouting anything except “Bueno, El Niño!” Two minutes into injury time, Torres had returned and thrust an estoque into the worn-out bull that was the Blaugrana team.