The glorious unpredictability of North Korea’s triumph over Italy. 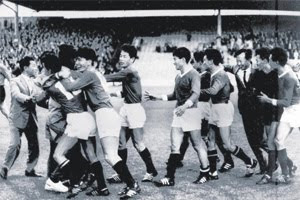 The 1966 World Cup will be remembered for more than England being crowned as world champions for the first and, so far, only time. It was during the same tournament that one of the greatest shock results in international football history was recorded, when North Korea faced Italy.

The Asian team had arrived at the tournament they were never expected to qualify for. That they did was as much thanks to boycotts and withdrawals as it was to their footballing expertise. What should have been a convoluted route involving multiple African and Asian teams, plus play-offs turned into a simple home and away contest against Australia, which the North Koreans won, and headed off for England.

Politics and football are uneasy bedfellows and the idea of playing the North Korean anthem and flying their flag in England just a few short years after Britons had perished in the Korean war was anathema to British politicians, to say nothing of the sensitivities of their cousins across the Atlantic who were still in a hard-faced, don’t blink, game of stand-off across the DMZ on the troubled peninsula. A ruse whereby only the opening game and final would see flags and hear anthems provided that most British of solutions – a compromise – however, and North Korea took their place in the tournament.

Placed in Group 4, they were the perceived makeweights in a section that also contained Italy, Chile and the USSR. Form seemed to be playing itself out when the physically bigger and stronger Russians bullied the Asian team into a 3-0 defeat in the opening game. Facing Chile next however was a different proposition. The South Americans had a reputation for not travelling well and despite Marcos giving them the lead, the Koreans rallied to equalise through Pak Seung-zin to earn a share of the spoils.

Ever friendly to the underdogs, the fans of the north-east, where the Koreans trained and played at Ayresome Park, had little concern for political matters and took the battling team to their hearts, and the draw – plus other results in the group – held out the unlikely prospect of progress into the quarter-finals.

The Italians had arrived on the crest of some massively encouraging results. Victories over Poland and Bulgaria, both by 6-1 margins had their form stamped by a three-goal win over Scotland and a five-goal triumph over Mexico, and on the club scene, the Milan clubs were dominating the European Cup. Ahead of the tournament, Italy looked like the team to beat. The problem was that, when they packed their suitcases for England, they had forgotten the box labelled ‘Form.’ It would be a costly omission.

In their first game, the Azzurri, edged past Chile 2-0, but it was hardly a stirring performance and one that was brought into sharp contrast by a 1-0 defeat to the Russians who were all set for the last eight. The question was who would join them. The Italians’ stuttering form meant that if the North Koreans could summon a victory over the mighty Azzurri, they would join the USSR in the quarter-finals. But things like that don’t happen. Do they? The Koreans’ inspiration was the fabled flying horse of Korean lore, the Chollima. And it would take a giant leap of faith by that mighty stallion to get them over the line. Enter Pak Doo-ik.

On 19 July at 7.30pm, the teams kicked off a game that would be remembered by all who watched it live at Ayresome Park, or on television. It would be easy to get lost in the romance of the story and assert that North Korea simply outplayed a lacklustre Italian team, and there is some measure of truth in that, but there were mitigating circumstances.

Italian skipper and Bologna legend Giacomo Bulgarelli had been doubtful for the game thanks to a knee injury, but manager Edmondo Fabbri had deemed the forward too important to leave out and gambled on his fitness. Sometimes, when you roll the dice however, it turns up ‘snake-eyes’ and on this occasion that particular serpent bit the Italian manager. Early on, when Bulgarelli attempted a challenge on Pak Seung-zin he aggravated the injury and, with no substitutes, Italy were a man light.

Just before the break came the moment when a little known 24 year-old midfielder from the Moranbong Phenian club in North Korea became the answer to so many football trivia quiz questions. A clearance by the Italian defence was nodded forward again by Yong-Won Ha and, after letting the ball run across his body, Pak Doo-ik hit it low and unerringly into the net past a despairing Enrico Albertosi.

Commentating for the BBC, Frank Bough confirmed the score for any who doubted the evidence of their eyes. “The North Koreans take the lead five minutes before the break,” he screamed. “What a sensation!” You can say that again—and he did. Should the Fiorentina goalkeeper have done better? Possibly, but the jumping and cavorting Koreans celebrated and cared little for such evaluations. Despite increasingly frantic pressure as the second period wore on, the Korean defence stood firm, with the best chances of Azzurri salvation coming from two squandered chances by Marino Perani.

At the final whistle, Italian heads were bowed with thoughts a less than celebratory reception awaiting their return home. For North Korea, the fairy-tale lived on for 25 minutes into their quarter-final against Portugal at Goodison Park. Strikes by Pak Seung-zin, Li Dong Woon and Yang Seung Kook had the Asian team astonishingly three goals clear with Portugal looking on the ropes, punch-drunk, and on the verge of being knocked out. A revival headed by the estimable Eusebio turned things back towards sober reality though and the Europeans won out 5-3.

The North Korean World Cup fairy-tale had come to an end, but for those who witnessed the triumph over the fallen giants of the Azzurri, the enduring memory of the most improbable of triumphs will long be remembered.

(This article was originally produced for the ‘Improbable Triumphs’ series on the ‘These Football Times’ website).