Beauty and the Best – Paolo Maldini and Franco Baresi. 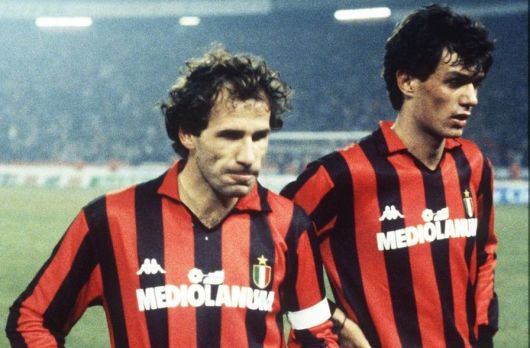 At the heart of almost every successful team is a solid backline, usually built around the central defensive partnership. They are the bedrock of the team. They provide the foundation upon which a team is built and can grow and flourish. If the value of such partnerships is gauged by the success enjoyed by the team, then the trophies garnered by AC Milan when they dominated European football in the eighties and nineties suggest that the partnership provided by Paolo Maldini and Franco Baresi was nothing but pure gold.

Both players were ‘one club’ professionals and only ever wore Milan’s change kit, if it wasn’t the famous red and black stripes on their backs. Between them, they turned out no less than 1,621 for the Rossoneri in careers laden with trophies and awards. Whilst both were diligently professional, and complemented each other with a symbiotic perfection on the pitch, the perception of them, in their physical appearance at least, was very different.

Maldini had the playboy looks. Tall, dark and tanned with a brooding smile he was the epitome of Italian style. On the field, although he was combative, he also had a natural elegance about him that spoke of abilities far exceeding those of even most outstanding full backs. His ability was also backed up by a dedication to fitness and prolonging his career with the club. The son of a former manager and player, Paolo Maldini oozed Rossoneri passion and the Milanista tifosi massed in the Curva Sud very much took to him as one of their own. If Paolo Maldini was the ‘Beauty’ then, was Franco Baresi the ‘Best?’

The legendary defender was shorter, skinnier and nobody’s idea of an Adonis, certainly no beauty, but probably the outstanding central defender of his generation. In an interview with Jamie Carragher, published in the Daily Mail back in 2015, Maldini himself waxed lyrical about his team-mate. “He was a short, skinny guy but so strong. He could jump so high. The way he played on the field was an example for everybody. He wasn’t a big speaker, no, no, no. The way he played, the way he trained was an example,” he enthused.

Maldini went on to explain that very little of Baresi’s success was born of natural physical attributes, but of a professional attitude and dedication. “He wasn’t like Stam, a big guy who was strong and fast. He had pace, but he was only 70kg. But let me tell you — when he hit you with a tackle, he was so strong.” It’s a ringing endorsement of Baresi and playing alongside him clearly left a lating impression on Maldini. Carragher enquired as to “how big an influence was Baresi on you?” The answer was both clear and full of respect. “For me, he was the role model,“ he confirmed. “He was a reference. He was also very good with the ball. Very, very good. It is very hard to find a good defender, who is strong and good with the ball. Very hard.” Maldini was also happy to confirm that, without doubt, Baresi was the best defender he had ever played with or against, at club or international level, but there was more to it than that. When Carragher asked how exceptional he was, Maldini simply said. “That’s exactly it. He was special.” Clearly the player who featured alongside Franco Baresi considered him the ‘Best.’ This Beauty and the Best partnership would produce some outstanding performances for their club and drive it on to undreamt of glory and success.

Franco Baresi joined Milan in 1977, beginning a career that spanned two decades. Appointed captain of the team at just 22 years of age, his leadership qualities were recognised early. As Maldini eluded to though, this was no shouting, gesticulating captain, with arms flailing around to be the centre of attention, Baresi’s leadership was all about example. Disciplined attention to the game and ferocious in the tackle, Baresi was the ideal defender, but his talents extended beyond merely a destructive excellence. An outstanding range of passing, superb technical ability with the ball at his feet and an uncanny ability to read the game and see opportunities to move forward from his sentinel position made him the ideal libero. Players further forward would come alive when Baresi was in possession, striding forwards out of defence, as so many attacks began from such situations. The quiet professionalism and application that turned the 5’ 9” defender into a giant on the pitch was the guiding light for his team.

Such ability should surely guarantee a rich harvest of silverware, and Baresi accumulated trophies with zeal. His would be rewarded with three European Cup triumphs, four Scudetti, two Intercontinental Cups and four Italian Super Cups. He was also a member of the Azzurri’s World Cup winning squad in 1982. His contribution to Milan’s cause would be underscored by the awards of AC Milan Player of the Century and Serie A Player of the Century. Such was the respect he engendered.

Paolo Maldini’s achievements hardly suffer by comparison. Seven Scudetti and five European Cup/Champions League triumphs – three of which were achieved alongside Baresi – is the stuff of dreams. Take into account that he won his first in 1989, and the fifth one arrived no less than eighteen years later, and the player’s longevity is well illustrated. Throw in a Copa Italia success, two Intercontinental Cups, a FIFA World Club Cup and five Italian Super Cups and it’s a list of embarrassingly proportions.

Maldini’s career with the club began some eight years after Baresi had made his debut, but the length of his paying time with Milan, an incredible 24 years, meant that there were a dozen years when both served in the club’s colours. It’s surely no coincidence that this period contained some of the club’s most glorious seasons. In the late eighties and early nineties, AC Milan’s Rossoneri were the premier club in Europe. First under Arrigo Sacchi, and later, when Fabio Capello took over the reins, Milan had a team that swept all before them, collecting silverware with the enthusiasm of a magpie on speed. Silvio Berlusconi had brought three Dutchmen into the club to bolster the team’s power going forwards. Ruud Gullit, Marco van Basten and Frank Rijkaard delivered on that, and Milan had a potent strike force. It was, however, at the back of the team that the pulse of the team was beaten out, and it had an all-Italian heart.

Originally, Maldini was deployed as a left-back, with Alessandro Costacurta playing alongside the skipper in the heart of the defence, and Mauro Tassotti guarding the other flank. It was the stingiest of defences. Despite Serie A’s reputation for producing outstanding defenders, some of the statistics of the era are still eye-wateringly good. In a run stretching between 1991 and 1993, Milan went an incredible 58 league games without defeat – a run that comprised the entire title-winning 1992-93 season – they conceded just 21 goals. That may seem outstanding in itself, but in 1987-88, the total was 14 and only one more than that in 1993-94. In fact, the early years of the nineties were barren in the extreme for any team coming up against the Milan defence. Across the first four years of the decade, with that backline consistently in place, Milan lost less than a dozen games in total. It’s a figure that bears repetition. A total of just 11 defeats in one of the most competitive leagues in Europe across four complete seasons of 34 games. Extrapolate it across the entire period and you get 11 losses in in 136 games. Only losing one game in every twelve speaks of consistency and the highest quality of defending.

Although beginning as a left-back, Maldini exhibited the game intelligence and defensive attributes to serve equally well, or perhaps even better, as a centre back and when he moved there to partner the captain, the pair formed an indomitable partnership. There’s little doubt that having Baresi alongside him, eight years his senior, was a massive help in developing Maldini’s play at the heart of the defence. Having a mentor of that stature alongside him meant it was inevitable that all of the skipper’s good habits would be picked up and built on his already outstanding abilities. It’s a little akin to having Albert Einstein as your Physics teacher at school. It’s true to say that, the number of games they played together as a central defensive pair, was less than those when Maldini played on the flank and Costacurta partnered Baresi in the middle. What they lacked in quantity though, was more than made up for in quality. Those games not only produced outstanding performances but, for the younger man, also provided a ‘finishing school’ par excellence in the art of the central defensive role.

They played in the same back line, in Serie on almost 300 occasions, conceding just 221 goals. It’s little wonder that the Rossoneri were so successful and the partnership received such adulation. All that, and a finishing school too. Talk about learning on the job! It was therefore to no-one’s great surprise that when the great man drew down the curtain on his career the armband he had worn with such distinction was passed on to Maldini. They had shared in so many domestic, European and indeed global triumphs, passing on the captaincy therefore seemed entirely appropriate.

When Baresi’s career was finally brought to a halt, having appeared in more than 500 Serie A games for Milan, the club granted him the honour of retiring his number six shirt as a mark of respect. Later, when the Maldini retired from playing, well past his fortieth birthday, the same fate awaited the number three shirt. By this time, Maldini had played 647 times in Serie A games. It was, and remains, a record. The same goes for the number of appearances for Milan in all competitions. Maldini’s total of 902 is unlikely to ever be breached at the highest level of the game. He had also played 126 times for his country.

For a club to have been blessed with one such outstanding defender is something to celebrate. To have two such players wearing your colours is to be more than favoured by the gods of football. To have both playing together can only be the guarantee of success and the promise to deliver your club to the heights of glory. In having Franco Baresi and Paolo Maldini not only present in the same backline, but also have them paired at the heart of the defence and then have one mentor the other so that the flame was kept ablaze is surely unfair to any and all opposition. ‘Beauty and the Best’ were truly an outstanding duopoly and set the standards so many other defenders have sought to emulate. So far, no-one has done so.

(This article was originally produced for the ‘Duology’ series on the ‘These football Times’ website).