Penalties and slaying the monsters of the Id. 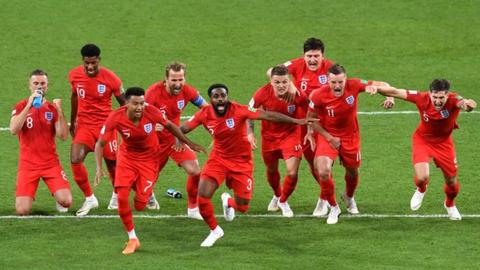 According to Freud’s model of the human psyche there are three elements which, when combined, comprise our mental state. The Id is the instinctive drives that are ours from birth. The Superego is the part that acts as our moral brake, a self-critical conscience formed from the norms of society and the Ego is the mediating element that balances the desires of the Id and the mores of the Superego. OK, that’s all the psychoanalysis precepts sorted now. So, what has any of this to do with putting a football into the net from twelve yards? Well, it may be that an understanding of this may explain how England managed to overcome their recalcitrance with penalty shootouts.

Very few fans of English football will be unaware of the dreadful record both the national and many English club sides have had over recent years when involved in penalty shootouts, particularly in major tournaments. Up until the game against Colombia, England had only prevailed on a single occasion – defeating Spain at the European Championships in 1996 – with no less than half-a-dozen reverses dooming the Three Lions to elimination. Were these down to technique, emotional weakness or just a matter of the fates of football turning their smile away from England?

Penalties are often referred to as a ‘lottery’ as a metaphor to illustrate that it’s just a matter of chance, much as with the flip of a coin, but such a record would suggest that there’s probably more to it than that. This sort of conclusion is only strengthened when comparing England’s record to that of other teams – the Germans spring to mind initially – who have prospered so regularly in such circumstances. The semi-finals of said European Championships and the World Cup of 1990 are examples where they have triumphed over England. As most, especially England fans, with dread and doom to the fore expected them to do. And therein lies a hint to a potential explanatory theory.

There’s an old saying that goes something like, ‘Nothing succeeds like success’ and as with so many such truisms, there’s a corollary to it in that ‘And nothing fails like failure.’ Win one shootout and you expect to win another, because you know that you can. Lose one and you expect to lose another following the same logic. There is therefore a tendency for trends and bucking your trajectory is the trick to breaking a circle that seems to go an and on until you disappear up your own penalty spot.

I wonder how many England fans were approaching the end of extra-time against Colombia with a depressingly familiar feeling of ‘Oh no. Not penalties again!’ and fully expecting it to be the inevitable precursor to England going home, rather than the pre-game confidence of ‘football coming home’. I would venture to say that the majority, if not the overwhelming majority, would have been of that persuasion. Now consider that feeling greatly increased by the circumstance of involvement, heaped onto the shoulders of the players put forward for the somewhat dubious honour of deciding the country’s fate in the foremost footballing competition on the planet.

You’ve already taken the seemingly endless walk from halfway line to the penalty area, picked up the ball, placed it on the spot and heard the referee’s whistle. It’s over to you now. You and no-one else. No-one that is except your inner mind and the raging battles between Id and Superego going on in your consciousness. Instinctively there’s the seductive knowledge that England fail at penalty shootouts. You can’t clear your mind of blessed pizza adverts and the tabloid infamy inevitably that would surely follow. Shame and discredit heading your way. The goals shrink in size and the goalkeeper becomes some giant, filling all corners of it. How can you possibly get the ball past him? Well, you can’t, can you, because England lose shootouts. That’s just the way it is. Such instinct robs you of ability and belief and the ball balloons over the bar, or your instinctive belief is given full validity as the ‘keeper guesses your intention and palms the ball away to safety. Head bowed you return to consoling team-mates at the halfway line, and the comforting thought that it wasn’t your fault, it’s just the way things are. It’s instinctively true. Each pat on the back from your team-mates is tainted with their thought that even if they should now also miss, the blame and ridicule won’t be theirs alone. There are enough slices of pizza to go around.

Perversely, that’s not what happened against Colombia though. For weeks now, when Gareth Southgate had been harangued with questions about penalties, he’s replied that they have been practising and repeated a phrase that may now have much more resonance than seemed apposite at the time. “It’s about owning the process,” he said. It’s a neat phrase if it means nothing but encouragement and trying to build a bit of confidence, as with sending someone into an interview and telling them that they should ‘own the room.’ Nice, but hardly of any sustainable use. But, what if it meant more than that? What if it meant building a mental ability to defeat the instinctive demands of the Id and instead focus on the positive attitudes engendered by the Superego. Let the Ego decide the battle – in more ways than one.

Kane battered away his penalty, as he had done on three previous occasions in the tournament already. Rashford despatched with almost equal aplomb. Then Henderson who had been as the lifeblood of the team through the 120 minutes, coursing up and down the field without pause, bringing life and salvation. A telegraphed penalty? Perhaps, but it wasn’t a bad strike and needed an athletic block by Arsenal’s David Ospina. Colombia net and for the watching millions back home, the die seemed cast.

There’s another guy in this equation too. And after the denouement, Jordan Pickford revealed how he had been primed with knowledge of the expected Colombian penalty takers and where they usually placed their shots. Tellingly he mentioned that only Falcao had gone against the grain, but for the other takers his information had been reliable. It meant that for each succeeding Colombian taker, they had seen how the England goalkeeper had gone the correct way each time, ramping up the pressure to be ever more accurate in placing the ball out of his reach. The fact that he hadn’t saved a single shot was a logic perhaps dominated by the Id instinct of increasing pressure.

Up stepped Uribe and, pushed into keeping the ball away from Pickford, his shot cannoned off the bar. England could square it up again, but if the pressure was high before it was climbing into the stratosphere now. Who among England fans expected Trippier to miss out? More now than would be willing to admit it, I guess. All falling prey to the monsters of the Id. But no, he netted and England were still alive.

Carlos Bacca is 31 and has been around a number of Europe’s top clubs for a while. He’s case-hardened and a more than reliable striker. He knows how to take penalties, but Pickford also knows where he likes to put them and if Uribe’s miss was prompted by Pickford’s previous attempts to save, Bacca’s may well have been influenced by the shot that struck the crossbar. ‘Don’t miss the target,’ would have been the Id’s demands. ‘You can’t score if it’s off target.’ Although hardly a poor attempt and firmly struck, the upstretched glove blocked the shot. Two successive missed spot-kicks. One perhaps influenced by three preceding strikes and the last by the previous one. This is what happens to England, not their opponents. For a reference, look back at the spot-kicks in England’s elimination at Italia ’90 and consider if there’s a similarity. It struck me straight away. Dier eases the ball home and England win out. A penalty shootout in a World Cup and England triumph. That sentence has been a log time in the coming.

So, was it Southgate’s policy of convincing his players to ‘own the process’ that saw England to such an unexpected triumph? Was it all about allowing the Ego to decide the matter in favour of the Superego, and put the monsters of the Id back in their darkened caves for a while? It’s certainly possible and plausible. Apply the learned logic of a player having an opportunity to score from a mere twelve yards against a goalkeeper – at least theoretically, anyway – locked onto his line until the ball is struck, and the odds are strongly in the taker’s favour. Pick a spot, practise it to minimise potential errors, build confidence and you’re halfway there. Knowing that such belief and practise mitigates against doubt and fear and it’s a massive swing in your favour.

Gareth Southgate, slaying the monsters of the Id? Well, perhaps. A bit like Freud’s psychoanalysis though, all this is merely theory. Perhaps it is fate or chance or whatever. England won a penalty shootout though and you want to believe that wherever the monster of defeat came from, it’s been slayed, at least for a while. If the Sweden game ends up as a penalty defeat however, don’t blame me. I’m just working on instinct!