Football on the small screen – The Manageress. 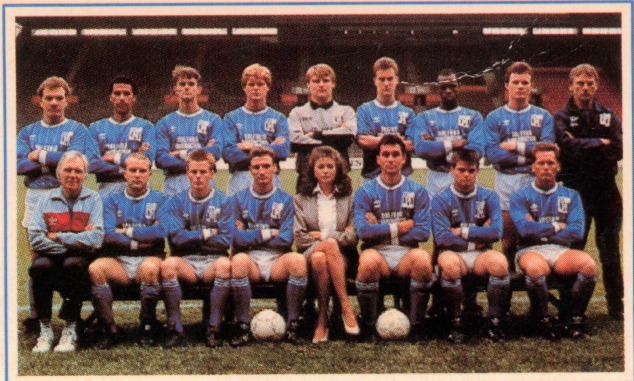 Back in 1989, a woman was in residence at number ten – the house in Downing Street that is, not the slightly withdrawn striker position – and Channel Four introduced us to the idea of female managing a professional football club. In some ways, the programme was a sign of the times, in other ways, very much less so.

‘The Manageress’ featured Cherie Lunghi as Gabriella Benson, a glamorous and successful half-Italian businesswoman, who is appointed manager of a struggling second division (Championship that is, in new money) football club. Her position being gained, largely thanks to the influences brought to bear by her estranged father, who just happens to be a Uefa committee member.

Now, if that seems a plotline that stretches audience credulity a little, think for a moment how difficult it is now to imagine a woman being appointed as manager of any of 92 top line football clubs in the country. With that pinned in mind, if you’re old enough, then cast your mind back the best part of 30 years to the mores and attitudes of those times. You’ll probably then realise that writer Stan Hey needed some way of shoehorning the impossible into the just about barely possible, and his scenario at least had the merit of being broadly logical.

Through the series, Hey uses the scenario of Benson managing a football club, to play out the various perceived attitudes of archetypical characters in the game. Certainly, in the early episodes, the key issue for Benson is not that she’s a woman, it’s that she’s an outsider. You often see pundits on television – I’ll mention no names – lauding certain people, usually ex-players, for being ‘a proper football man’ with all the inherent qualities such a label endows. In sociological terms, what such attitudes portray, is simple ‘group closure’ though. We’re on the inside and you’re not. We’ve built a wall and you can’t get in. Sorry.

This is the early issue that Benson has to deal with. Yes, she’s a woman, but over and above that she’s also educated, successful in business and has no history of involvement in the game. She’s the most outside of outsiders, and even when invited to discuss the team’s tactics and failings in a recent game, and doing so eloquently, the defensive wall is still in place.

An example is delivered by her assistant who takes up the role of a loyal sentinel apparently defending his territory. “People like you don’t feel the game in your hearts,” he accuses. Then going on to denigrate supposed fans, who watch the game from boxes, rather than standing on the terraces. Roy Keane would have approved had he not merely been a teenager playing for Cobh Ramblers at the time. It’s a bit like when you hear those same pundits expounding the theory that if you haven’t played the game, then you simply don’t understand it, and then fumbling over the laws of the game.

The series occupied a delicate juxtaposition between being a ‘what if’ proposal and ‘no way’ denial. The club in question is never named, merely being located as in ‘the north’ but there’s nothing especially northern about the attitudes displayed by many of the characters. The brilliant Warren Clarke as Chairman Martin Fisher, and the too-true portrayal by Tom Georgeson as Benson’s Assistant Manager Eddie Johnson could have been plucked straight out of central casting. Clarke in typical bluff northern businessman mode, eye for the next bit of brass and despite the appointment of the new manager, a misogynist of the highest – or should that be lowest – order.

Johnson, is the long-suffering ‘football man’ stung by the sad realisation that he’ll never hit the top, possessing a wealth of knowledge and experience, but much of it rooted in the past. He tries to work with his new ‘gaffer’ but eventually leaves the club to take on a managerial role for himself, before returning to try and poach one of Benson’s players for his new employers. Those two characters represent the microcosm of the football fraternity of the time – some would argue not much has changed – and how they see this strange interloper who has landed in ‘their’ game.

Whilst painting these characters in a firmly dim light, along with the agents and other ne’er do wells that Benson comes into contact with, Hey treats the players a little less hardhly, despite showing them as indulging in the gambling, womanising and other less than salubrious practices many players were apparently occupying themselves with in those days – and maybe some still are today.

All that said, the bloke-ish initial attitude of either trying to ‘get off with her’ – in the parlance of the day – or get rid of her, wanes over time and is replaced by a tacit acceptance, eventually turning into belief. The Rubicon appeared to have been crossed when the Chairman visits the Dressing Room after a game and asks about a free-kick move that nearly brought a goal. “Whose idea was that free-kick then, lads,” he asks, fully expecting one of the players to claim it. Sheepish faces to the floor, one of them answers: “The gaffer’s.”

As for the fans at the games, like all supporters, as soon as the team begins to win games, not many of them care too much about who is in the dugout. Very much of its time though, there’s a particularly distasteful example of the racism that was rampant – and to some extent stubbornly remains – amongst some supporters with fans spitting at a black player, even though he’s a member of their own team.

As well as reflecting attitudes of the day, The Manageress was also quite forward looking, and not only because it placed a female in charge of a professional football club. It must be remembered that when the series first aired in 1989, it was the best part of eight years ahead of Arsene Wenger rolling into north London with his diet sheets of boiled chicken and pasta. Pre-dating the scholarly Frenchman, Benson seeks to update the diets of her players, much to their dismay and disbelief, introducing an approach to ‘refuelling’ that had more to do with continental expertise, than fish, chips and twenty Woodbine.

It would be easy for some to argue at the time, that cooking was very much a woman’s area of expertise anyway, but it would surely be less easy to similarly argue about an enlightened approach to tactics. As well as innovative free-kick moves, Benson also promotes the value of thoughtful defending for example, where a tackle is the last option, not the first. This sort of approach fitted ill with Eddie Johnson, who had been brought up on the ‘get a hard tackle in early’ school of thought. Again though, even in the modern game where many preach the values of what is perhaps a more muscular approach, the player who wins possession through interception or harrying opponents into errors is much lauded.

All fictional programmes involving football suffer from one great problem of course, the total inability to portray ‘game action’ as anything resembling reality. The Manageress suffers a similar fate and although Hey mitigates this by limiting such instances to a sideshow status and maintains an almost monochrome feel to the game being portrayed, such minimalism can only take you so far.

The programme was broadly successful and had a second series the following year, with the club battling for promotion to the top rank. Instead of a fairy-tale ending, with glory and promotion though, Hey went for the pragmatic denouement. The club fell short and in the final episode, suitably labelled ‘At the end of the day’ Benson finds that, despite her efforts and the progress made with the club and staff, some players had been indulging in performance enhancing drugs. It’s a cold bath sort of climax.

Enjoy it or not, and think of it as prescient or otherwise, it should be remembered that the rationale for the programme was entertainment, and not some sort of social comment. That remains true, despite a lot of the issues examined being very much reflective of the football and the wider society of their day. Neither is football an apt vehicle to explain life, and shouldn’t be taken as such, even in a fictional romp. What The Manageress did succeed in doing though, was to use football almost as a metaphor for a society ill at ease with itself, but still resistant to change.

There’s an interesting postscript to the programme as well. Of course, it’s likely that the two events may not be linked in any way whatsoever, but the series was adapted for French television under the title of ‘Miss Manager et ses footballeurs.’ A decade or so later, in 2014, the French Ligue 2 club Clerment Foot shattered the glass ceiling preventing women advancing in the game by appointing Helena Costa as their manager. Costa was certainly qualified for the position, having a Masters degree in Sports Science, holding the Uefa A qualification and having experience of working with Benfica for many years in her native Portugal.

For all her experience and qualifications however, the move was widely trumpeted as a novelty conceived by their Chairman, Claude Michy, something to draw attention to a fairly ordinary club, with a mundane record of achievement. A month later, Costa quit the club, giving credence to such claims, asserting that she had quickly realised that she was only there for publicity purposes and had been shunned in all of the decision-making processes. The club’s reaction certainly does not seek to demur from such an assessment. Shedding any veneer of an inclusive attitude, Michy declared that “She’s a woman so it could be down to any number of things … it’s an astonishing, irrational and incomprehensible decision. She’s developed a confidence problem, but I don’t know what it was that caused this.”

Despite this, the action of his manager didn’t dissuade Michy from treading a similar path again. A few days after Costa’s resignation, Clermont announced the name of their new appointee. It was to be former France women’s national captain, Corinne Diacre. Another stunt? Well, some three years later Diacre remains the club’s manager.  The club remain in Ligue 2, and finished in twelfth place last season. It would be interesting to hear what Gabriella Benson would have made of that.