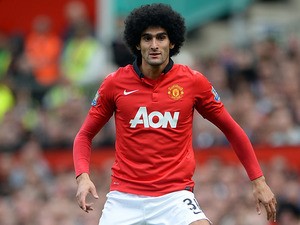 As his second season at the club is drawing to a close, Manchter United, now seem to have worked out how to make Marouane Fellaini a star.

It’s surely one of the greatest unofficial accolades that the game has to offer. No-one votes for it, not the press, not other players, not even the fans. Someone somewhere suggests it, and off it trots merrily making its way through the highways and byways of ‘football talk’. Eventually, it’s travelled the length and breadth of the football community, by common assent it becomes accepted as part of the lexicon of football. I’m talking about having an element of the game named after you. There’s the Panenka penalty, the Cruyff turn, the Makelele role and even Fergie time, to name but a few of the uncontentious – well, fairy uncontentious anyway – ones. Now, another nom de guerre may be seeking to elbow its way into the language of football. At the moment, there’s only the merest whisper of it being circulated. Isn’t that how it always begins though?

So, let’s give it an airing. It’s the ‘Fellaini position.’ Be careful how you say it out loud, and especially who to, however.  The uninitiated may just misinterpret it as some kind of acrobatic maneuver devised in a darkened room to heighten performance. Actually, that may not be a million miles from the truth, but don’t get looking on the top shelf of any bookstore or newsagent trying to find out more about it, that’ll just get you into trouble; and any protestations about merely looking for information about football tactics, will only bring a wry smile and a condescending nod.

Marouane Fellaini was purchased from Everton to play for Manchester United during David Moyes’ ill-fated but brief reign at the club. The Belgian had been one of the star performers at Goodison Park under the Scot. His physical and abrasive style was a constant thorn in the side of Everton’s opposition and, when Moyes moved to take over from the retiring Alex Ferguson, most pundits reckoned Fellaini would be top of the list of players he would like at his new club. 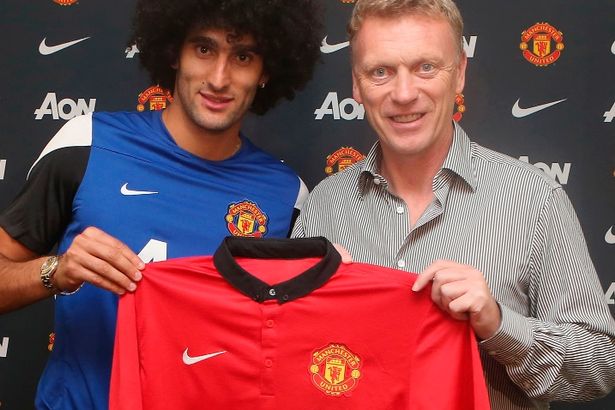 The complications of the deal however merely presaged an initially troubled time for Fellaini at Old Trafford. With David Gill departed along with Ferguson, the control of transfer activity was in the hands of new top man at the club, Ed Woodward. Although a hugely successful businessman, Woodward was still naïve to the many channels and backwaters that make the transfer windows such a murky pool to peer through. It somehow transpired that United eventually ended up paying over £27million to complete the transfer which, according to reports, exceeded Fellaini’s contracted buy-out clause by some £4.7million. Nevertheless the deal was done.

There are as many different theories regarding Moyes’ failure at Old Trafford, as there were unexpected home points dropped in that season. Many however centred on the Scot’s apparently natural penchant of concentrating on ‘making it difficult’ for United’s opponents rather than imposing the ‘traditional’ Ferguson-inspired style on a game. If there is any truth in this, it’s probably reasonable to assume that much of it came with Moyes from Goodison Park, where such a philosophy would have carried more credence, and be largely understood and appreciated.

One of the parties to suffer in this period was however Fellaini. Deployed as a holding midfielder, it was a position that not only offered limited opportunities to display his strengths, but also exposed his limitations. By the ragged end of Moyes’ tenure, it seemed pretty clear that Fellaini was not a Manchester United player, and the summer transfer window would merely confirm that.

Football is a contrary game however, and when Louis van Gaal arrived to pick up the pieces and try to glue the club back together again, there didn’t appear to be any great desire to move the Belgian on. It’s difficult to say what, if any, efforts were made to achieve such an end, but whatever may have been the case, the new season saw Fellaini still a part of the first team squad.

Revolution or evolution? Plan or serendipity? Take your pick. United’s season started splutteringly, but as van Gaal found more and more of his ideas taking root in the squad, so his squad began to blossom, and Fellaini was part of that. It largely began with the seemingly uncultured approach of throwing the Belgian upfront as an emergency striker when seeking a goal late on. It was a seemingly jarring ploy for a manger considered one of the arch tacticians of the modern game. Nevertheless, the role produced some rewards, and clearly the Dutch master saw value in Fellaini’s attributes. 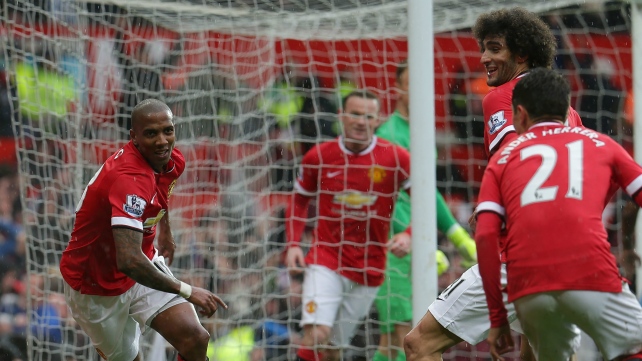 Fellaini and Ashley Young have combined to form a potent partnership on United’s left flank.

As things progressed however, a more defined plan developed, with a relatively new innovation.  The Belgian was to be deployed on the left of a midfield three, and to play in a role I’ve seen described as an ‘Aerial Pirlo’. The aging Italian maestro may perhaps be slightly affronted at the description, but it does to some extent illustrate what van Gaal was asking Fellaini to achieve. Playmakers come in a number of shapes and sizes, and are often described as ‘number tens’ these days. The nimble footed and quick witted conductors of the team’s play, these guys are the ones with the creative feet. What a lot of players do with their feet however, Fellaini appears detailed to achieve with his head.

Over the past month or so, the Belgian’s domination of opponents in that section of the field, linking up with the more delicate probings of England outcast Ashley Young have seem United dominate more and more games and develop a way of playing that is both effective and plays to their strengths.  Deploying Fellaini away from the penalty area negates the attentions of the opposition centre-backs who are reluctant to be drawn forward out of position to challenge the Belgian. In many games, this has meant Fellaini is an efficient ‘out ball’ for United, also capable of controlling the ball and initiating attacks.

Being in a relatively wide initial position already, Fellaini also has the opportunity of cutting in and striking goals from midfield, but perhaps more potently, pulling out wide when the ball is on the other side of the pitch to match himself up against, usually much smaller, full-backs and pose a threat for a far post cross. This was amply illustrated in the recent Manchester derby, when the Belgian towered above Gael Clichy to head a goal. 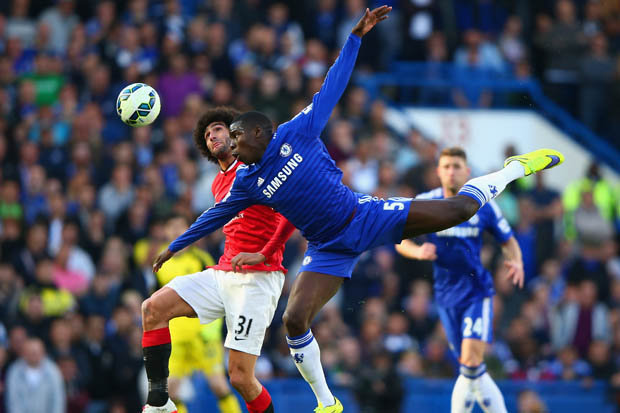 Jose Mourinho was concerned enough about the threat of Fellaini to deploy Kurt Zouma – normally a centre-back – in a midfield role to contain the Belgian.

During United’s recent game at Chelsea, Jose Mourinho paid Fellaini the huge compliment of selecting nominal centre-back Kurt Zouma in a midfield role to nullify the effectiveness of the Belgian. The fact that it both worked, and that the result also blunted United’s attacking meance, speaks volumes of how successful the Belgian had been up to then, and how Manchester United had come to rely on him. Whether other manager’s will follow Mourinho’s lead and deploy a player on Fellaini to make it a 10 v 10 game will be seen over time, but even consideration of such a measure is a compliment to Fellaini.