“For God’s sake, let us sit upon the ground

And tell sad stories of the death of kings:

How some have been depos’d, some slain in war,

Some haunted by the ghosts they have depos’d,

Some poison’d by their wives, some sleeping kill’d;

All murder’d: for within the hollow crown

That rounds the mortal temples of a king

Let us sit on the ground and tell sad tales about the death of kings.

Shakespeare places Richard II on the Welsh coast in view of a castle for this passage. It’s a speech both moribund in meaning and shot through with pathos. A king, facing a battle he cannot win, against superior arms, with only a battle-weary army, oft-broken and of now, absent. He knows his course is run, and reflects on the inevitability of his fate. But enough now of such works of literature. What relevance do they have to the world of football? Well, perhaps more than we may think.

Richard II was also known as Richard of Bourdeaux, but it is to another Frenchman that my attention was drawn following the weekend’s proceedings. A last minute goal from Danny Welbeck secured a home draw for Arsenal with Hull City on Saturday, a Pyrrhic victory of sorts one imagines, leaving the Gunners still on two wins for the season, already seemingly out of the race for title and facing a battle for the ‘non-trophy’ of a top four finish.

Arsene Wenger, the Frenchman in question is clearly feeling the pressure of the situation, as was manifest in his irritated and tetchy answers to the fairly innocuous questioning of BBC’s Match of The Day reporter, Jacqui Oatley after the match. Without going too deeply into the detail of the discourse, answers such as “You don’t listen very well to me” are hardly conducive to the erudite and cultured image Wenger often seeks to portray.  It moved that most placid of pundits Gary Lineker to use his Twitter account to reflect that: “Must say, I thought Arsene Wenger was arrogant, defensive and patronising to Jacqui Oatley in the face of excellent and fair questioning.” 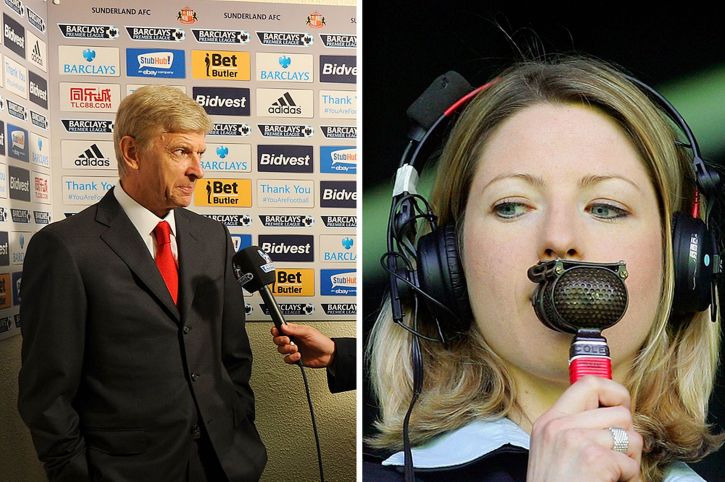 Arsene Wenger and Jacqui Oatley. Her interview provoked a tetchy response from the Arsenal manager

Wenger arrived at Highbury, as was Arsenal’s home in those days, in 1996 and for much of the first decade of his time in north London, stood toe-to-toe, slugging it out with Sir Alex Ferguson’s Manchester United, disputing the hegemony of English football. Following the FA Cup triumph in 2005 however, there followed a fallow period when the one-time dominant club went almost ten years without securing a trophy worthy of the name. The ‘specialist in failure’ jibe from Jose Mourinho, the boss of the nouveau rich Chelsea, must have hurt more than the structurally urbane Wenger let on, and may have been a contributory factor to the famous “A to B shove” when the two teams met a few weeks back.

The FA Cup triumph last year broke the dismal run, but it remains a fact that the years of regular silverware for the Gunners appear a thing of the past, rather than the future. The arrival of big money to both west London and east Manchester meant that the duopoly of the Ferguson-Wenger axis was doomed. The Scot retired the scene, but the Frenchman remains. Banquo’s ghost at an increasingly expensive banquet, but that’s a whole other play.

The past couple of years have seen Wenger ever more stretched in attempts to bring back the glory days. Always portrayed as the frugal guardian of his club’s coffers, the last twelve months or so have seen an oiling of the rusted-up hinges on the fabled Arsenal ‘transfer war-chest’ with big money purchases drawing in the likes of Mezut Ozil from Real Madrid and Alexis Sanchez from Barcelona. Even this largesse, a seeming sacrifice of a cherished obsession however has failed to turn the tide, and the thought begins to gain credence as to whether Wenger, as did Richard II, is contemplating the end of his era. Or, even if he isn’t, are others?

Shakespeare wrote of kings “slain in war” and many managers have lost jobs due to a series of defeats. Alan Pardew at Newcastle United may be particularly vulnerable to such a fate. Others, the Bard described as “haunted by the ghosts they have depos’d.” David Moyes may recognise that description. It is however the description of “some sleeping kill’d” that may be most apposite to Wenger.

For all the success Wenger has brought to the club, a single FA Cup triumph since 2005 ranks as pretty ordinary fare for a club that looks to itself as being in the top ranks of English football. There is of course, the enviable record of successiveand unbroken qualifications for Europe’s top table competition, but that’s only an invite to attend the ball, not a full ‘dance-card.’ Arsenal are now looking like a club with a glorious past – albeit very recent past – that quickly gets described as a ‘sleeping giant’ and that path leads us back Shakespeare’s line of “some sleeping kill’d.” The reason why the club may soon think it’s time for Arsene to move on could be explained in the last two lines of the quotation.

Managers are always deposed when, a bit like a retired postman, they can no longer deliver. They are “All murder’d: for within the hollow crown, that rounds the mortal temples of a king.” The success that lauds is also the doom that kills. In 1399, Richard II surrendered his realm to Henry at Conway Castle in Wales, before being imprisoned in the Tower of London. He died a few months later. There’s no tower prison awaiting Wenger, but a move ‘upstairs’ to a Director of Football post may feel that way for him if it he is deposed, rather than choosing his abdication.

In Scene 1 of Act 4 of Richard II, Shakespeare has the king lamenting that “You may my glories and my state depose, but not my griefs; still am I king of those.”  Arsene Wenger’s record in the English game should be lauded as a triumphant and an enlightened time. It would be sad to see his passing as a sad and dispiriting removal. It may be however, that such an event may befall this other son of France.

(This All Blue DAze article was originally produced for the ‘offsiderulepodcast’ website).