La Liga Preview: Barca or Los Blancos – who will reign in Spain? 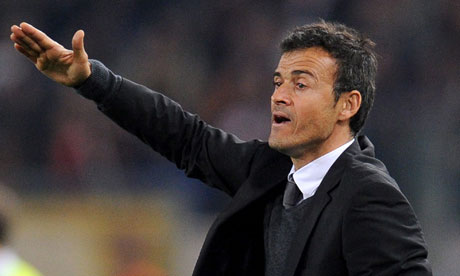 That the race for the La Liga title is likely to be contested by the duopoly of Real Madrid and Barcelona, will come as little surprise, despite the triumph of Diego Simeone’s Atletico Madrid last term. With the World Cup now completed and the summer’s transfer spending unfolding, the big two are poised for a Titanic struggle for supremacy. Over the next two weeks, I’ll be looking at the the two footballing behemoths of the Iberian peninsula and assessing who will reign in Spain. This week, I’m beginning with a look at Barcelona.

In the wake of the less than entirely satisfactory tenure of Tata Martino, new coach Luis Enrique has quickly established his template for success, with the former Blaugrana captain keen to shape the squad to play in the way he requires. In a media conference last week, he laid out his philosophy, declaring, “I want a team that is faithful to everything that has won it so much before, a team that scores goals, that defends well, that has playing resources, that plays the same at home and away … I don’t just want results, I also want to win playing attractive football.” The club appear to be keen to offer their new man the tools to deliver on that commitment.

Uruguay’s most gifted, if somewhat troubled son to the mixture. Having all three in harness is a formidable prospect, and offers goals aplenty for the Catalans. This will be delayed however until bans and backs have all been put to rights. Barcelona fans however must even now be in raptures at the prospect. Enrique clearly is. Quoted on the Barcelona website, he commented, “Coaches always want the best footballers, and we have them. I’m delighted, but it won’t just be those three playing. There are lots of players who can form part of the attack, and to be a good team you need everyone to chip in.”

The £75million laid out for Suarez may not be the end of the club’s purchases of World Cup souvenirs however. Colombia’s winger Juan Cuadrada is also in Barcelona’s sights, although Fiorentina may not be keen to sell unless an irresistible offer is made.

With lots of press attention on the Suarez deal and the swirling controversy that surrounded it, the arrival of Ivan Rakotic has fallen a little under the news radar. The potential impact of the Croat, however, should not be underestimated. The 26-year-old had an outstanding season for Sevilla last term and was a key target for the Blaugrana. One of the stars of the Spanish game last season despite playing for a less than stellar club, he finished with 15 goals and 17 assists from a midfield position. His performances and achievement were recognised by La Liga, as he was selected in the team of the season. Swapping the midfielder for Cesc Fabregas, and pocketing the fee from Chelsea to boot, has to be seen as sound business.

With the Croat surely likely to command a starting position in the Barcelona midfield, Xavi, Inniesta and Busquets will find places no easier to secure following the Fabregas departure. There is of course another player to add into the equation. Following his successful loan period at Goodison Park, Gerard Deulofeu is returning to the Camp Nou with high hopes and expectations. Everton would have dearly loved to have kept the youngster for a further season, but the fact that Barcelona wanted to take him back, suggests he’ll have a role to play next season. There’ll be an amount of juggling for Enrique to do in order to find his optimum midfield unit. The options are both wide and exciting.

Barcelona have also acquired two goalkeepers. Dutchman Marc-Andre ter Stegen and Chile’s Claudio Bravo both joined the club as replacements for the departed Victor Valdes and Jose Manuel Pinto. The Dutch keeper was signed on a pre- contract from Borussia Mönchengladbach at the turn of the year, and Bravo’s outstanding performances for Chile in the World Cup encouraged Enrique to lay out the £9.5million fee to Real Sociedad to secure his services. Competition for the position between the sticks will however be intense. Enrique has also promoted Josep Masip to the first team squad, and remarked, “Right now, if I had to name my first line-up, I’d pick Masip.”

With the goalkeeping position, midfield and particularly the front line all looking stronger, it only remains for the club to solve that ‘Achilles heel’ of a problem, in the centre of their defence. Since the retirement of the mane-haired Lion of Catalunya, Carles Puyol, the bridge has been guarded by Gerard Pique and the Argentina captain Javier Mascherano, whilst the nominal full-backs Alves and Alba rampage forward.

The club were linked for a long time with a move for the Chelsea maverick of a defender David Luis, but the lure of lucre and oil-money euros has now taken the Brazilian to PSG. The question is whether there’s another iron in the fire (Tottenham’s Jan Vertonghen has been linked) or whether Enrique will persist with the Pique-Mascherano axis, and mix in a few of the younger options. The answer to that poser, and the efficacy of it, may well be the determining factor in Barcelona’s season.

During the the same press conference last week, Enrique stated, “I am a born leader myself, and I lead this team. The challenge is making this have the right impact on the team.” The success or failure of that particular venture may well be judged on the destination of the La Liga title next season.