Thames AFC – The brief life of a club sold down the river. 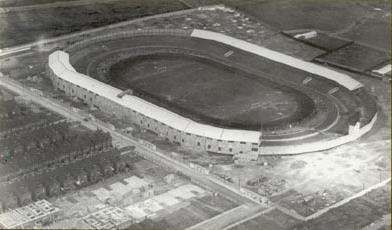 There’s a thing about football clubs and communities. Whilst, especially in contemporary days, ownership may rest in the hands of some mega-rich businessman or faceless corporate enterprise, football clubs in reality belong to the community. That is simply the case, because without that community, the fan-base, it’s very difficult to sustain a club at all.  You can’t just have a stadium standing around and decide to launch a football club to up its commercial value. Well, actually, you can sometimes. It’s pretty much what happened at Stamford Bridge in 1905 when Chelsea Football Club was launched. For every one that succeeds, many more fail. One such enterprise was Thames AFC.

The West Ham Stadium in London was owned by a consortium of businessmen back in the 1920s. With a capacity of 120,000 it was the largest stadium in England, dwarfing the new Wembley Stadium, built half-a-dozen years earlier. The venue was used in midweek for Greyhound Racing and Speedway, and although this brought in regular revenue, at weekends it lay empty.

Seeing football grounds around the capital filled with thronging crowds on Saturdays, to the owners, it seemed a logical step to launch their own club and house it at the stadium, filling in previously blank weekends with potential bumper attendances and keep the revenue flowing in. Thames AFC was conceived commercially in 1928, Thames AFC and took its place in the Southern League.

Ending up 14th in their initial season, they followed that up with a third place in the 1929-30 season. It so happened that Merthyr Town had finished at the foot of the Football League Third Division South that year, and the club failed to get re-elected, as was the process in those days. Thames AFC was elected to replace the Welsh club.

It seemed that things were now going swimmingly for the club owners, who even kept a reserve team playing in the Southern League for another season, whilst the first team took their place in ‘the big time.’ But this was when things started to go awry.

Now with increased costs, bigger gates were required, but with established clubs such as West Ham United, Clapton (latterly Leyton) Orient, Arsenal and Millwall in the locality, having already hoovered up the adherence of most of the football fans of the area, there was precious little untapped customer potential out there.

Results didn’t help either. Thames’ first season in Division Three south saw them finish 20th of the 22 clubs competing and, in December 1930, a mere 439 people turned up to watch the league game against Luton Town. There’s no record I can find that details the proportion that were accompanying the visitors, but it wouldn’t need that figure to be too high to expose the lack of any local affiliation to the new club. The attendance was – and to this day, remains – the record lowest crowd figure for a Football League fixture. Even a few short months into their first season in the league, the writing was on the wall. Things weren’t much better away from the West Ham Stadium with the club accumulating a miserly three points from a potential 42.

There’s always the possibility of things being a ‘shock of the new’ and improving as time goes on. That wasn’t the case with Thames AFC. Crowds hardly grew at all and as results followed a depressingly downward trend so too did attendances. Only occasionally topping 5,000 in the cavernous stadium, the club was neither filling the coffers of the owners or proving competitive on the pitch. They finished the 1931-32 season rock-bottom of the league and five points adrift of the club above them.

It was time to cut losses. Perhaps fearing the inevitable consequence of any attempt at re-election, the owners decided to write-off the enterprise as a failure and withdrew from the league. There was a brief hope of resurrection as talks pf a merger with Clapton Orient originally looked promising, offering up the prospect of bringing established support to the stadium, but negotiations foundered and the short life of Thames AFC was ended and the club put out of its misery.

The stadium itself, which from the start had been the raison d’etre for the club, rather than more traditionally being the other way around, soldiered on for another 40 years or so with Speedway and Greyhound racing, and even hosted the 1961 and 1965 BRISCA Formula 1 Stock Car World Championship races twice in the early sixties, before finally closing its doors and being sold to property developers.

Where Thames AFC once played out their brief day in the sun, there now stands houses and shops. It’s perhaps a suitable epitaph that the home of a club formed for purely commercial reason, and with no substantial community attachment, now houses the very community it lacked during its life.

(This All Blue Daze article was originally produced for ‘The Football Pink’ website).