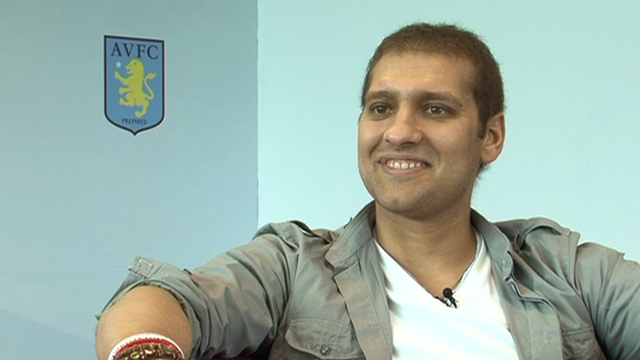 Back in March 2012, Stiliyan Petrov made a call to his agents. In these days of commercial opportunities it was the sort of thing professional footballers do all the time. This time however the content was very different. When Base Soccer Agency took the call from their client, it was to receive a plain truth. Petrov simply said: “I have got leukaemia.” It was the very phlegmatic way in which the popular Bulgarian captain of Aston Villa decided he had to deal with the illness.

Following a game against Arsenal a few days before, Petrov had complained of feeling feverish. Fearing a virus was to blame, the club swiftly took blood tests, and then a bone marrow scan, which led to the startling diagnosis. For anyone, in any walk of life, the dread ‘C’ word delivers a harsh realisation. For someone like Petrov, living out the dream of millions with a comfortable lifestyle and financial security, it would have been easy to lash out at the perceived injustice. Petrov was not like that however. This time, cancer had picked on the wrong man.

Following the diagnosis Petrov turned up to the club’s next home game, and on 19 minutes – Petrov’s shirt number – the crowd burst into applause, it was a gesture picked up by the opposing fans as well. In the stand, the television cameras panned to where the Bulgarian was sitting. Clearly overcome with the emotion of the situation, Petrov waved his thanks. The 19th minute applause has been repeated many times since and the number of players sporting the ‘Pray for Stan’ slogan on T shirts – even among non-Villa players – spoke volumes for how the always affable Petrov was respected throughout the game. 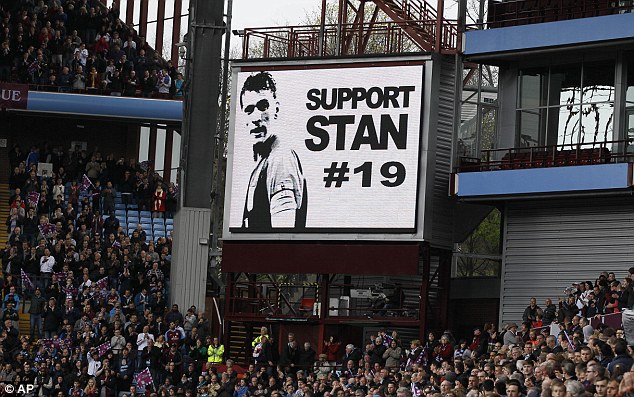 Villa fans – and many others throughout the game – showed their support for Petrov’s battle.

It’s to the Aston Villa’s credit that they maintained a close contact with their skipper throughout his ordeal, inviting him to be involved at the club and keeping a close association with the younger teams and players. Having such support and love expressed not only from Villa, but also the greater ‘football family’ would surely have been of help to both Petrov and his family who also shared the burden he was carrying.  That the dark days were greatly traumatic is sadly inevitable, as the regime of treatment took its toll. The loss of his career as a footballer was an early casualty. In the great battle he was fighting however, that was surely a small price to pay. Petrov himself has described the time as “being to hell and back, again and again.” It’s probably one of those things that no-one can really understand unless you’ve lived through it.

For all fans of the game, it was therefore heart-warming to hear news that ‘Stan’ as he is universally known now appears to be on the up. The BBC reported that, now 35, Petrov feels well enough to begin kicking a ball around again. It’s no surprise, but no less encouraging, that Petrov describes playing again as making him feel “like a little kid.” It’s the response of a ‘down to earth bloke’ who has looked the demon in the eye and now appreciates more than ever the simple joys of life.

Former Coventry City defender Davis Busst, whose own career was cut short by a serious leg injury, is managing Sunday League club, Wychall Wanderers, and has welcomed Petrov into the club. For all his success on the field in the past, Petrov describes his weekend sojourns into the grassroots of the game as “a good laugh and they’re competitive games. It’s just really nice to be out there playing a proper game.”

With typical self-deprecating humour, there’s no ‘big time Charlie’ attitude about the player who captained his country, playing 106 times for Bulgaria. “As far as positions go, you have to go where you’re needed. Sometimes only 12 players are there.“ For Wycall’s opponents however, the gloss of having rubbed shoulders with such a player is pretty obvious. Without a hint of self-aggrandisement, he jokes that “The one game, we were winning 2-0 and they had a different man marking me every 10 minutes.” There’s also more than an element of warmth when he remarks that “I meet a lot of Villa fans and it’s great to chat to them,” adding that “I do get asked for autographs and pictures after matches. The supporters have been great and I always had a positive attitude.”

Petrov knows however that this isn’t the end of the story, and although the disease is in remission, the fight is not yet won. As part of the news story, the BBC has placed a video of a feature on Petrov on their website – the link is below. It shows that, in the immortal words of a former Villa boss, the Bulgarian is ‘carrying a bit of timber’ compared to his professional days. “I’ve played 90 minutes and my fitness is improving but I need to be patient. Everything is fine, touch wood. There are only three months to go on tablets and I’m finished. I’m on steroids until January. I’ll be there again on Sunday but don’t ask me who we’re playing.” 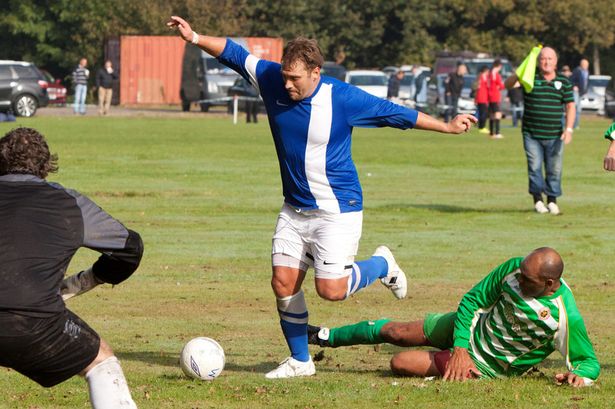 ‘Stan’ back home on the football pitch with Wychall Wanderers.

The last sentence there probably epitomises why the former Villa man is so widely admired. It’s a sentiment not lost on Dave Busst’s father, secretary of the Wychall Wanderers club. “The most amazing thing is that he’s such a lovely, down-to-earth chap. He comes along, pays his subs and has a drink with the lads. He is amazing. Players of that class, such is their footballing brain, they are three or four moves ahead even if they are only 40 or 50 per cent fit. He scored, and it was a good goal. On Sunday, we won our first league game 2-1 and he made both goals.”

It’s a glowing – and unsurprising tribute.  The video mentioned, also relates how Petrov has turned his experiences into a positive for others, offering hope and encouragement to others and in the worst cases, solace for a lost fellow-fighter’s loved ones. As Mr Busst Snr remarked “he’s such a lovely, down-to-earth chap.”

The playing record of Stiliyan Petrov is one of almost untrammelled success. He won the double in Bulgaria with CSKA Sofia, and secured the domestic cup again a couple of years later before moving to Celtic. With the Glasgow club, he won four Scottish championships, three Scottish Cups and the same number of League Cups. His time with Villa has been less successful in terms of trophies, but it’s of no surprise to note that he has twice been named as the club’s Players’ Player of the Year. This is of course on top of a century plus appearances for Bulgaria. This record, his inspirational attitude and approach to life has assured Stiliyan Petrov ‘legendary’ status, not only in his native country, but also in Glasgow and the claret and blue half of Birmingham. 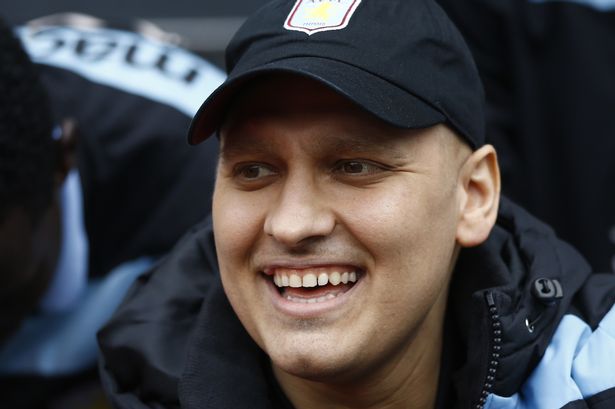 All of football should join in Stan’s smile. It’s great to see you back!

For all of his achievements however, perhaps the greatest accolade may be yet to come. With his treatment nearing its conclusion, it’s heart-warming to hear Petrov remark how it’s “incredible being able to smile again”. All things being well, in a few months, to that list of honours can be added the title of ‘Cancer Survivor.’ It will be an accolade fully earned. Only he will know the days of despair and the nights of terror he has endured.

“I’m lucky to be alive,” Petrov said. In the days when many people within the game have behaved with such dishonour, displaying a callous disregard for others, many would say that football is lucky to have had a man of Petrov’s character amongst its number. It’s good to see you back. Cheers Stan. All the best, mate!