Time is the great enemy of the football blog writer. An issue is thrown to the front of the game’s consciousness, just crying out for a story to be penned. You go into research mode, start gathering evidence and begin to put the piece together. Get the structure right, check your references and, finally, start to write. Then, without warning, the story changes. You didn’t see that coming did you? So, you go back, reassess and consider an alternative approach. Find your angle, and then… another twist in the tail occurs. You’re faced with two choices. Throw all of your research in the bin and move on, or realise that every twist of fate, every corner uncovered enriches the story and you shouldn’t let it go.

Such has been the story of Helena Costa’s appointment as coach of French second division side Clermont Foot, and the events that followed. The switchback of a story has all the ingredients of a soap opera, and would be entertaining, were it not ultimately dispiriting in its denouement – at least to date. During the tail-end of the 1980’s Channel Four broadcast series called ‘The Manageress’ with the basic plotline of a struggling Second Division club (this was before the days of the Premier League, and the league was what is labelled as ‘The Championship’ in new money) appointing a woman as team manager. The part of Gabriella Benson was played by Cherie Lunghi, and the story told of the trials and tribulations she went through, trying to be taken seriously as a woman in a man’s world. Sound familiar?

Although the series was relatively successful, with a second run shown in the summer of 1990, critics panned it as being unrealistic. 15 years or so later, I’m not so sure, at least in one sense. The subject matters it dealt, such as misogyny, relations between club and coach, agents, player behaviour and the media, have echoes in the story of Helena Costa and Clermont Foot.

Back in May, it seemed that the football world had changed overnight. The silent, but significant, sound of shards falling to the floor was created when Clermont Foot appointed Helena Costa as their new coach, and she crashed through the glass ceiling that had prevented women from acquiring the big job in of any of the major European leagues’ top two divisions.

Judged on any criteria other than gender, the appointment was fairly routine and uncontroversial. Costa’s CV certainly qualified her for the job with a low-ranking French Ligue 2 club. A graduate in Sports Science with a Masters degree and the holder of a UEFA ‘A’ Licence, she had coached the Benfica youth team between 1997 and 2010, leading them to second place in the Portuguese Youth League in 2005. This was at the same time as managing a lower league team and championship winning women’s teams. She had also had spells in charge of the national women’s teams of Qatar and Iran, and acted as a scout in the Iberian peninsula for Scottish Premier League team Celtic. Her experience also included a period of time working with compatriot Jose Mourinho at Chelsea during his first tenure at the club where, in complimentary terms recognising her ability, she was hailed as ‘Mourinho in a skirt.’ The difference of course, was that she was a woman, and that was news.

The club statement at the time of the appointment promised the dawning of a new era in football as the game shook off an outdated view of the world. “Clermont Foot 63 has chosen Helena Costa to be our new coach,” it said. “This appointment will allow Clermont Foot 63 to begin a new era.”

Under previous manager, Regis Brouard, the club had finished fourteenth in Ligue 2, and at the end of his contract, Brouard was leaving the club. It seemed at the time that this was a bold venture by a forward-looking club. Not seeking to break any mould particularly, but just appointing purely on merit. Gender was not an issue for getting, or not getting, the post. Or so it was portrayed. Although, I have to say that the publicity surrounding the appointment did have the feel of something of a novelty act. At the time however, I was content to put that down to my own cynicism about football’s inability to change its attitudes.

In fairness however, it was a cynicism born of experience. It’s true that boardrooms of football clubs have seen a small, but growing female influence; Karen Brady at Birmingham City and West Ham United, Delia Smith at Norwich City are two that spring to mind. This however tends to be more on the administrative and financial side of the business, rather than at the coal-face of the game. Also, remember this is only a few short years since the infamous incident involving Andy Gray and Richard Keys, who were caught on tape disparaging the ability of women to understand the offside law. Talking by a microphone they didn’t realise was live, Gray reportedly remarked “Can you believe that? A female linesman. Women don’t know the offside rule.” Keys dutifully replied “Course they don’t.”  Although the episode cost both of their jobs at Sky Sports, it sadly portrayed evidence of an attitude widely held within the game.

How widely held? Well, only last year, at a FIFA Congress in Mauritius, FIFA president Sepp Blatter was welcoming three female members onto the Executive Committee of the organisation that runs the game worldwide. During his closing address, Blatter asked for applause for the appointments, adding “Are there ladies in the room? Say something! You are always speaking at home, now you can speak here.” At a different event, he described Asian Football Confederation vice-president Moya Dodd, one of the trio appointed to the committee as “good looking.” Yes, of course Blatter is widely regarded as a bumbling fool, but with such an attitude at the head of the game, is it any wonder that many still feel the game has yet to shake off its shameful misogynistic attitudes? Although my cynicism was perhaps not unreasonable, it was still disappointing to see it borne out by events.

Just one short month after her appointment to take over as coach at Clermont came the news that Costa had resigned the post. In a statement, the club president Claude Michy shed what had seemed an image of forward-thinking and enlightened attitudes and instead, donning the garb of Blatter, offered his take on the resignation.  “She’s a woman so it could be down to any number of things … it’s an astonishing, irrational and incomprehensible decision. She’s developed a confidence problem, but I don’t know what it was that caused this.” Veneer stripped away. Cynicism in full flow.

A few days later, Costa gave her version of events in a statement in Portugal. She declared that it had become clear that her role at the club was merely as “a face to attract publicity.” Offering evidence in support of her stance that she described how she had quickly been isolated from any decision making processes, and related how, when she arrived at the club, not only had friendly matches been arranged without any consultation, but also players had been signed without her agreement or even knowledge.

She also stated that she had sought clarification via emails from Olivier Chavanon, adviser to the president, but had initially received no reply, then a terse message that said, “You’re tiring me with your messages.” She went on to describe that there had been “a series of events that no trainer would tolerate and a total lack of respect as well as amateurism.”

Describing her relationship with Chavanon, she stated that “When I tried to get in touch with (him), he declined to reply to emails and messages. In the five days before I was due to begin the job, he didn’t come back to me. By the time he did, I already had the information from the club secretary. I disagreed with the players being signed, but the only answer I got from him was that he was ‘fed up with my emails.’”

Understandably, by this time, Costa had decided that the whole job was a sham and was furious at how she had been used to generate cheap publicity for the club. International headlines had been gained at the cost of her reputation. Having sought the support of the club president, she was at first encouraged when he told her that “he would take a decision and come back to me.” Such hope was quickly dashed however when nothing happened. “He didn’t,” she added, simply. At this juncture, she felt there was no other option than to resign. “Until now I’ve totally honoured my commitments, but after a discussion with the president, I’ve decided to leave. It’s my own decision,” she said.

Her statement concluded by saying that this was no whim, or spur of the moment decision. “Nothing was sudden and unexpected about it. It was more of a series of episodes along the way.” It seems however that the whole Clermont experience hasn’t soured Helena Costa’s confidence or ambition. She was quick to dismiss Michy’s assessment that she had suffered a crisis of confidence when faced with the reality of taking over the club. “I still feel the same confidence in my work, the same confidence I had when I agreed to take the job as manager of Clermont Foot. I feel ready!”

And there the story may have rested, but more was to follow as the Clermont Foot kicked its way into the game’s headlines once more. Just a few short days after Helena Costa made her statement in Portugal, the club announced her successor. The new coach had exemplary credentials. She had accumulated 121 caps for France over a 12 year period and been assistant manager to the national team and manager of her former club Soyaux for the past four years. Yes, I did say ‘”she” and “her.” 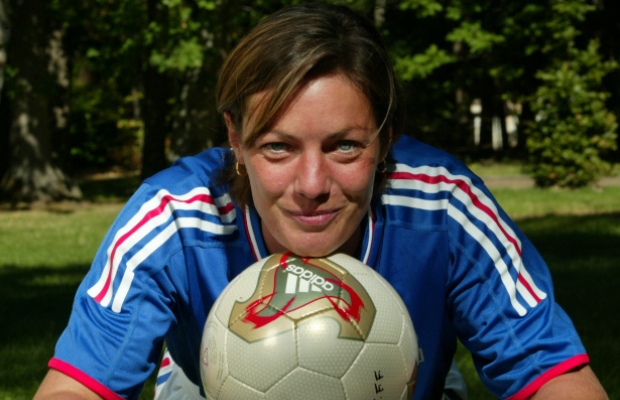 Apparently unperturbed by Helena Costa’s experience, former France captain, Corinne Diacre had accepted the post at the club. I’m not sure if it’s even worth asking the question as to whether the fact that the new coach is another woman is coincidental, or merely an appointment on merit. Cue fanfare. Cue big press coverage. Cue cynicism.

I mentioned that the story of Clermont Foot and their female coach had more twists than a TV drama. It certainly seems that way. If however the desire of the club was merely to gain publicity, it’s certainly done that. Going back to that Channel Four series, the last episode was called ‘At the end of the day’ and focused on Gabriella Benson, the manageress, discovering that players had been ‘doping’ during the club’s promotion push. It provided a downbeat end to the story. One is left to wonder whether, for different reasons, such a sad realisation is in prospect for Corinne Diacre.